International Babywearing Week is coming to a close, and I’ve got to squeeze in a post here.

When I was pregnant with Tycho, I decided I wanted to wear my baby. I did a little research and learned that I wanted something ergonomic, so a narrow-based Bjorn-style carrier was out. I bought an Ergo in stylish, match-everything black. At the time it seemed like a big purchase, and as far as I knew it was the top of the line babywearing device. 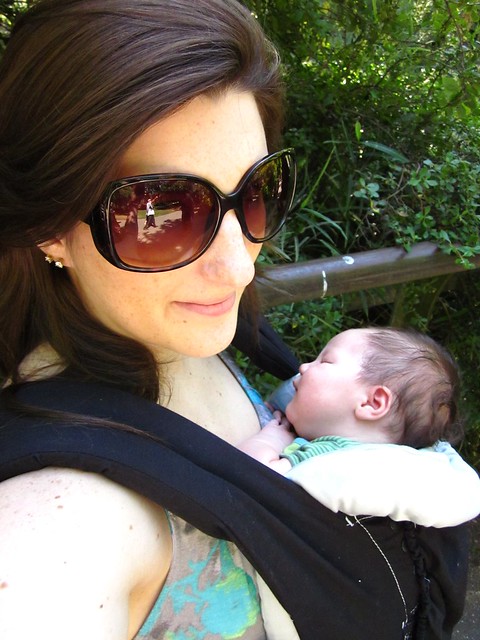 I loved that thing when Tycho was little. I discovered pretty quickly that in general I found the stroller cumbersome, and having baby strapped to my body was best for both of us. I remember I figured out nursing in the carrier when he was three months old and I took him to the Puyallup Fair, and it was a total game changer. But despite loving wearing him when we were out and about, babywearing with Tycho was for me really only a mode of transportation, an alternative to the stroller. Despite his eagerness to be held ALL. THE. TIME. it really didn’t ever occur to me that I could use babywearing when we were at home to make my life easier. Still, he was my first, so sitting on the couch all day with my baby wasn’t so bad.

But Tycho was a big baby. He was born huge, and then got even more off-the-charts enormous as he grew. He hit 25lbs before he made it six months, and the Ergo was killing me. He was a bowling ball of dead weight and I wasn’t ready for back carries yet. I had no concept of the babywearing community, so I just assumed the jig was up. I cried a little and bought myself a nice MacClaren umbrella stroller and the Ergo was retired to light use, when we needed to get through the airport, or other such events. And that was that.

But fortunately for me when I was pregnant with Atlas a few lovely friends with little babies introduced me to the world of wrapping. I joined the appropriate groups on facebook and stalked the swaps. Right around seven months into my pregnancy I bought my first woven wrap. It was definitely not the best choice for the job, but it was so pretty and I was committed to learning, and I didn’t want to wait, so I decided to practice with my now 44lb 3 year old.

And you know what? It was amazing. Yeah, he was heavy, but I could wear him, and it was doable. And we both loved it. It was wonderful timing, as we were about to leave for a trip to France for my baby sister’s wedding, and I have no idea how we would have made our visit work without my newfound love of wrapping. Airports and subways and train stations with all our luggage were a breeze with him safely on my back. As soon as we got home I purchased a second wrap.

That summer I also discovered that while it was nearly impossible to convince him to lie down for a nap, if I put him up on my back in the early afternoon and go on a walk or unload my dishwasher he would fall asleep easily. While we were waiting on Atlas to be worn, I wore Tycho almost daily, and brought my wrap with me when we were out and about because wearing him was so much easier than carrying him in my arms when his little legs would get tired.

Atlas has, of course, been worn pretty much since birth. Multiple times a day, everyday.  With two kids I no longer had the luxury sitting on the couch and nursing, and holding my baby while he naps. Big brother is a busy kid and we have things to do. Babywearing suddenly was no longer just a mode of transportation, but one of the most effective parenting tools at my disposal, a close second to my breasts.  I can, more often than not, meet both my children’s needs, despite how widely they may differ. Mine and Tycho’s life did not come to a screeching halt with the addition of a new sibling, and baby brother is able to come with us anywhere we go. I literally cannot imagine being a mother to two without babywearing.

But babywearing in general, and wrapping in particular, has become so much more than just a way to hold my baby. It’s a hobby, sometimes an obsession, a community. After Atlas was born I left my job for good. It wasn’t exactly my first choice, but the community both locally and on the ‘net has given me a place to be, an identity to try on for a while. I get to collect exquisite pieces of art that are both incredible fashion statements and amazing parenting tools. I have built in friends and playdates to get me out of the house. Transitioning to this stay-at-home role had me feeling so lost, but I have a home in my babywearing community.

These years while I can wear my children on my body are so fleeting and sometimes it seems bizarre and frivolous to commit myself to such a degree, both emotionally and financially, to these long pieces of cloth, but I love this place I have found myself in.